This is the seventh post on the Adventure Film project. If you haven’t read parts 1-6 of the adventure film blog series yet, you can read them here:

I suppose it takes a pretty hardcore RV geek to get excited about an entire museum dedicated to the family tree of RVs. I suppose that’s why I enjoyed it so much…I’m a geek.

A trip to the National RV Museum & Hall of Fame was 2 years in the making.  Nearly three years ago when the idea of making a documentary film about teardrop trailers for high school use occurred to me, I called the Smithsonian to ask what resources they may have available.  They referred me to the National RV Museum & Hall of Fame because they said that they weren’t experts on the topic.  They suggested I talk with a man named Allen R. Hesselbart, who is the RV adviser to the Smithsonian, a writer, and librarian.  I called the museum and Al was excited about the idea of making a film on the topic of teardrops.  From that point in 2008, I would occasionally think of visiting the museum.  Not until January of 2010 did I think visiting was possible.

The National RV Museum and Hall of Fame is relatively new. Yet it houses the oldest and rarest RVs in the world.  Within its walls are the ancestors of modern RVs.  In conversation, I’ve told people about visiting a museum on the topic of RVs.  I often get incredulous looks as if they don’t understand why anyone would want to see a bunch of old RVs.  It is ironic that RV shows across the US net more sales than any other event for the industry.  People flock to see hundreds of modern RVs which are posh, clever, and basically the same.  Yet the idea of visiting a RV museum is crazy to them.  Think of the museum this way, it is a giant RV show through time.  Now that you think of it that way, you must go for a visit.  It is a kick!

Al is a gracious host and gave Landon and I permission to tour all of the RVs (as long as we were careful).  The general public can tour through many of the vehicles on site but there are a few that are “look but don’t touch”.  These are the rarest, most valuable, the less durable, or the hardest to physically tour.  As a result of our special permission, I was able to sit in the world’s oldest known RV.

The oldest R.V. in the museum — and it is believed to be the oldest survivor anywhere — is a 1913 Earl travel trailer that was built for a California college professor. It is displayed behind a Blue Ford Model T (Historic also because it was before Henry Ford started painting them all only black).  It is a hand-built trailer that mimics the designs of WWI aircraft with wooden slats covered by canvas.  This is an RV that was created before there was an “industry”.  In fact, most of the RVs before the 1940s were home built. 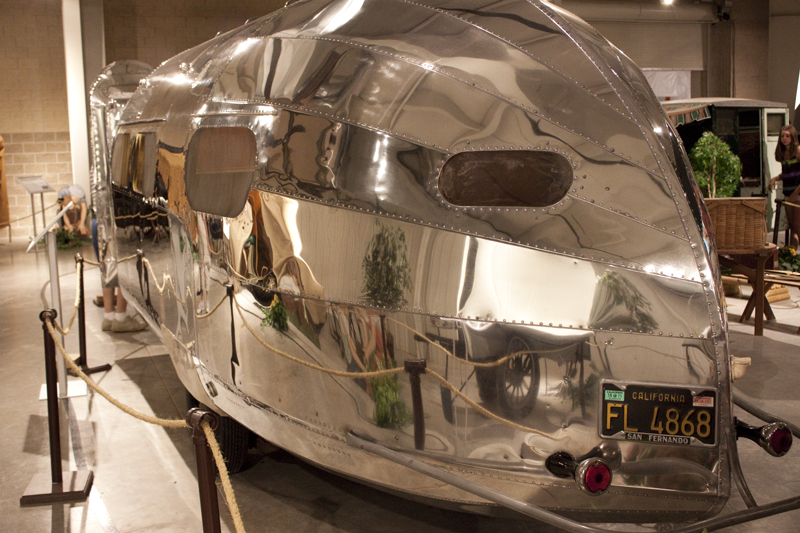 Another notable RV is the Bowlus Road Chief.  This trailer looks like an Airstream but it isn’t.  It is actually the trailer that inspired the Airstream.  It is a massive trailer for its time and weighs about 1100lbs.  The engineer who designed and built them, William Hawley Bowlus, was a well-accomplished aircraft engineer.  He was the foreman engineer on the Spirit of St. Louis project.  Bowlus thought his design for an RV was marketable.  He was right.  Although he was a genius engineer, he was a lousy businessman, and eventually, his trailer company went bankrupt.  Airstream essentially stole his ideas and started making trailers based on his designs.

The only teardrop in the group is a 1954 Scotty Sportsman teardrop.  The manufacturer of this teardrop wanted a small RV for hunters and fishermen that could easily fit into a garage.  It is a cozy little number and features a frontward facing window.

Other notable RVs are a tent trailer with wagon wheels from the 1916,  a 1931 Chevrolet Housecar used by movie star Mae West, a 1915 Model-T with a slide-out camper & chuck-wagon-style galley, and a few covered wagon tent trailers.

One of my favorite parts of the experience was seeing the creative solutions to toilet and bathroom facilities.  There were jars that pull out from under dinner tables, small wooden boxes with holes in the top stowed in closets, what looked like a wooden kitchen chair with a crudely cut hole in the middle, and a bathtub made of plywood -painted to seal it. 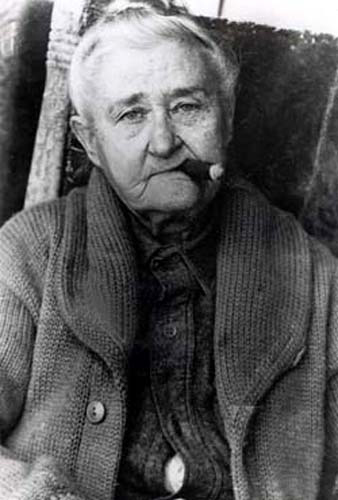 Among all of these great pieces of history is a strange statue of a man-ish looking woman.  Poker Alice Tubbs was a famous South Dakotan gambler.  She outlived three husbands, ran a brothel, and shot a few people.  Her “house” for a while was a long trailer.  To me this trailer looks like an ancestor to the mobile home -except not as classy.  The museum doesn’t actually have her home but they felt compelled to feature it because of its story.  The house was moved, added on to, and refurbished in Sturgis, South Dakota.  It now functions as a bed and breakfast (see here for bookings).

The people of her time said that she was attractive until the day she died in Sturgis, South Dakota -always nicely dressed. I suspect that if her picture were on the hot or not contest nowadays, she wouldn’t win.  But her story is a definite win (read more about her here).

Her motto when sitting down to the poker table?: “Praise the Lord and place your bets. I’ll take your money with no regrets.”

At the end of our time in the Museum, Al Hesselbart, was gracious enough to set aside some time for an on-camera interview.  His knowledge on the topic of RVs and teardrop trailers is vast.  In fact, his knowledge is so large that it intimidates the word “vast”.  Al provided facts and trends in the teardrop trailer world before, during, and after WWII that were new and intriguing to me.  His interview actually changed the focus of the adventure film.

Following the interview, he took us into the library.  The National RV Hall of Fame and Museum has the world’s largest library on the topic of RVs.  Being a teacher, I am a library geek and the time we spent there really wasn’t enough.  Al recommended a few books which I plan to purchase.

As the museum closed, we were able to get some final shots inside the various RVs without the nuisance of sightseers.  Then we packed up our gear and headed out for Chicago.

We approached Chicago, Illinois on the coat-tails of rush hour.  This was good because it gave us time to work the maps and GPS to find the beginning of the mother of all roads – Route 66.  The Adventure film isn’t focused on the route because its focused time period is before, during, and after WWII in the 1940s.  Route 66 didn’t come into its own until the 1950s.  However, it seems ridiculous to make a film about travel across the US without mentioning the road that started it all.  Once visiting the route, we headed out.

Landon and I agreed that we so hated driving across the upper mid-west that we were going to drive straight from Illinois to Missoula, Montana.  We suddenly felt a sense of urgency to return home.  As the sun slowly sank, we entered Wisconsin and decided that it would be a good state to use as our start line for the multi-state sprint.  We pulled over and slept until morning.  Then it was off to the races.

Our goal?:  Wisconsin to Missoula, Montana in a single shot.

Driver? Mostly me (because Landon is too tall to drive the Jeep comfortably)

Why? Because we felt stupid and acted on it.